Glory is an optical phenomenon consisting of a series of concentric coloured rings about the antisolar pointvisible against the background of a cloud, fog bank or mist. 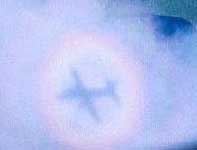 A glory can be seen when an airplane flies in sunlight above a layer of cloud consisting of water droplets - as distinct from the much colder and higher clouds composed of ice particles. The rings generally resemble those of a corona, with similar coloration - violet on the inside, to red on the outside. However, but instead of being centred around the moon, the glory appears around the shadow of the aircraft projected on to the layer of cloud below.

Glories are caused by diffraction in which the droplets act as a point-source reflectors. The light which is diffracted to give the glory seen from an aeroplane, is sunlight which has already been reflected inside the droplets of the cloud in such a way that it returns along its original path. Multiple rings may occur and glories vary considerably in size, depending on the radius of the water droplets of the cloud in which they have their origin.

As an aircraft proceeds along its track, a glory may vary in size, corresponding to the changing composition of the layer of cloud below. The smaller the water droplets in the cloud, the larger the diameter of the glory.